I have got 3 NES consoles, 2 working, 1 broken. 1 for CPU/PPU in case if the one from the broken one has them broken. 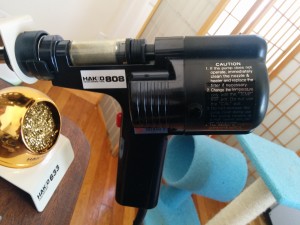 It works great, only after about an hour of work it will sometimes shut down where you need to let it cool down for an hour. I got 4 extra nozzles because of the different pinouts. Also, a note, the gun is quite hot even on the lowest setting so you might not want to use it with too sensitive components. But it works great, even with large ground plates, I didn’t have any issues with the complete board, except one pin, re-added some solder to it and it came right out. 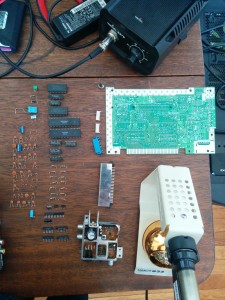 There are different revisions of the board, the desoldered board is revision number 10, I also have a revision 7 and 8 board. The 10 board has an extra resistor (R17 2.2K) connected to the crystal, there 2 capacitors are connected to the crystal which aren’t on the previous board, and R13 changed but not the silk screen. After desoldering the board, it could fit all in the expansion port cap.

I then scanned the files and dew all traces, vias and pads in an SVG drawing using InkScape. I also named everything. I then wrote some code to automatically generate each trace to separate layers, I am not yet releasing this software because of I want to add functionality for it to also export to eagle, make the lines between the components, no auto routing.

The progress so far can be downloaded from this file: NES PCB